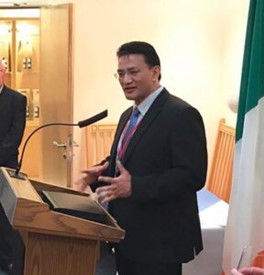 Deepesh Man Shakya (a HANACS Advisor and former Board member), Lead of the Ireland Nepal Chamber of Commerce (INCC: https://www.incc.ie/) joined the HANACS precursor, UKNFS board in January 2020. Now (Summer 2022) he is a HANACS Advisor.

Mr. Shakya is an electronics engineering specializing in FPGA in a programmable chips company in Dublin. Before joining the company in 2004, Mr. Shakya received his M.Eng. in Dublin and worked as a lecturer at the National College of Ireland. He graduated from Amrit Science College in Kathmandu as a Gold Medalist before heading abroad for his higher studies.

He has been involved with the Nepal Ireland Society (NIS) since its establishment and currently serves as the President of the society. On his initiation, the relations between Nepal and Ireland has flourished to a new height at the people level, organizational level and recently at the government level with the establishment of a Parliamentary friendship group in both countries.

Deepesh has also served as Nepal Tourism Board (NTB) Honorary Public Relations Representative for Ireland and organized numerous tourism promotion events in Ireland and all of Europe. He is the main architect and the Chief Coordinator of Nepal’s Europe Wide campaign – “Visit Nepal Europe 2017″ and the Chief Coordinator of the ongoing Global Campaign to promote Nepalese Cuisine – ” Experience Nepal – Cuisine and Culture.

Mr Shakya has initiated the Ireland – Nepal Chamber of Commerce (INCC) with supportive guidance from HANACS Lead Alan Mercel-Sanca, and is a nationally and internationally respected figure where Nepal-Ireland links furtherance in the fields of business, trade, culture, tourism, healthcare, and education.