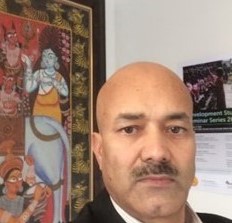 Dr Acharya is one of the founder members of the HANACS’ precursor, the UKNFS at the time of its inception by Ram Hari Adhikari and Alan Mercel-Sanca. He has successfully completed a PhD degree from Bournemouth University, England, and has interests and specialism in fundraising, development of the healthcare project, research mainly in the field of public health nutrition. His PhD research project entitled Knowledge, attitudes, beliefs and behaviour of mothers of young children related to healthy eating: Comparing rural and urban perspectives in Nepal. During his study at BU, he also served as a student representative (2014-15) where he experienced coordination between a group of the students and management authorities of the University.

He has also attended several national and international workshops/conferences such as the World Congress of Nutrition, Micronutrient Forum Global Conference, the Nutrition Society Conference and etc. during the PhD study. Besides this, he has published journal articles and conference papers in nutrition-related issues of Nepal.

Jib was awarded by the Global Supplementary Grant-OSF(Europe) (for the year of 2012-2013 and 2013-2014), Sight and Life Scholarship (2011-2015), Santander Universities mobility award (2014) and) and the British Council award (2014). He has discovered a new knowledge and added to the literature. The new knowledge termed ‘diversified views’ which is one of the major barriers to recommend a health food to the preschool-aged children in Nepal. Besides this, Dr. Acharya has developed the ‘3P awareness strategy’ which is one of the most powerful tools to increase the level of awareness for the community people.