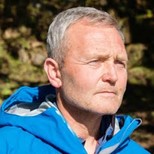 After nearly 30 years as an educationalist in Scotland, James Lamb, an HANACS director and lead for the HANACS in Scotland, combined his love for outdoor adventure and photography to become a professional landscape photographer. James has walked and climbed extensively all over the UK, Europe, USA, Canada and Nepal. In 2014 he established a trekking agency in the Nepal Himalaya with Tashi Lama, a Buddhist monk.

The agency aims to increase local employment, with the profits funding a local charity, The Little Sherpa Foundation. When the first earthquake hit Nepal in April 2015, James was in the Himalaya filming for The Adventure Show (aired on the BBC in September 2015). Filming continued when the camera crew and producer accompanied James back to Nepal to see first-hand how the people featured in the initial programme, were rebuilding their lives, both physically and mentally. The resulting film has gone on to win a number of national awards.